While my country was celebrating Super Bowl Sunday, the New England Patriots vs. Seattle Seahawks, I wanted to learn about two movies I have never seen, The Patriot (1928) starring Emil Jannings and The Sea Hawk (1940) starring Errol Flynn. While the New England Patriots may have won, The Patriot is considered a lost film, being the only Best Picture nominee where no complete copy exists . 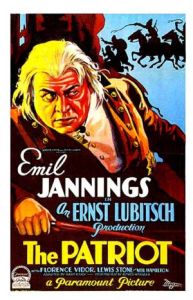 The Patriot, based on the story of Catherine the Great’s son, Tsar Paul I of Russia, had a then-huge budget over $1 million and was nominated for 5 Oscars: Best Picture, Best Actor (Lewis Stone), Best Director (Ernst Lubitsch), Best Art Direction and finally for Best Screenplay, which it did win. It also starred Florence Vidor, firstly the former wife of director King Vidor and then later the former wife to celebrated violinist Jascha Heifetz.

It was the last silent film nominated for Best Picture until The Artist (2011). While mainly a silent film, it did have some talking sequences, synchronized music and sound effects. Only pieces held by UCLA Film and Television Archive are left of this film. In Josef Von Sternberg’s autobiography he wrote that he used about 10 feet of The Patriot when he directed The Scarlet Empress (1934) and Lubitsch did not even recognize the scene.