On Her Majesty’s Secret Service is one of my favorite Bond films so I was excited to see George Lazenby. I would have loved to have had his autograph but I can’t be spending such money. If he had an autobiography, I probably would have bought one. I hear he is working on it so perhaps in the future. 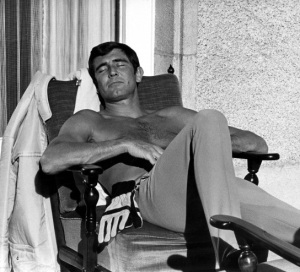 I did get a photo with him. I mentioned I have been to Australia. Later in the day, across the street from the hotel,  I would even find at Wegmans supermarket, Violet Crumble, an Australian candy bar that I used to like. I wanted to ask if he ate it. If yes, let him know he could buy it across the street but I never got to speak with again.  Anyway back to George, he asked when am I going back to Australia. Well I wish I could return but I’m financially poor. I still want to visit other places in the world. I think he mentioned he was in Australia a few weeks ago with the recently deceased Richard Kiel. I’m getting old. These celebrities tell me things and I quickly forget. Nonetheless Australia and Richard Kiel were mentioned so I can at least assure you he saw Richard Kiel a little before he died. 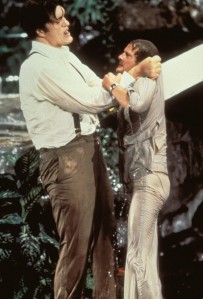 Lazenby is sill attractive but no longer a brunette. During a panel with Bond girl Lana Wood, he proved to be charming, quick, and witty when he discussed his arrogant and mischievous ways during the 1960s and 1970s. There was a fun moment when his cell rang. It turned out to be his family so he put them on speakerphone to tell them to listen while he was interviewed. So the phone remained on speaker until someone asked about his relationship with Diana Rigg. Lazenby excused himself and spoke into the phone stating he had to leave and hung up. 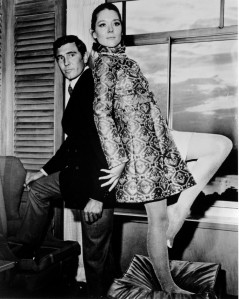 He kind of wishes he did one or two more Bond films but instead left the series due to the advice of an agent who felt Bond was going out of style due to the hippie culture of the time and movies like Easy Rider were the future, however he states perhaps it was for the better. If he had been Bond longer, would he have had his kids? Would he have turned to drugs due to the fame? He appears happy with the way life has moved forward for him and his disappointments were the means to where he is now.

It seems he had a possible second chance at movie success by signing a contract with Bruce Lee. Unfortunately Lee died before they made any films. It surely would have moved his career forward, perhaps a legacy but in a different genre from Bond. This opportunity was outside Hollywood, as Lazenby believes he was blacklisted in Hollywood. Whenever he was offered a part, it was later taken away. He feels the Broccoli family probably had something to do with it. Despite his gut feeling, it remains a mystery. If he did manage a Hollywood opportunity, it was because it was very last minute making it impossible to reach the mysterious people in time to thwart his opportunity.