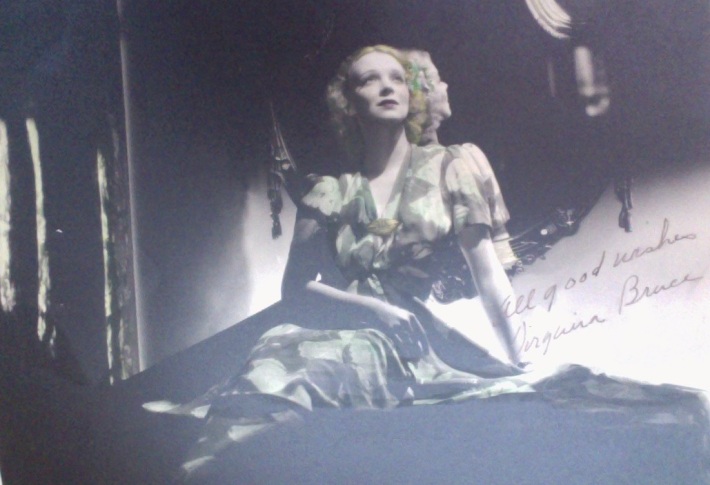 My lovely boss got me the beautiful Virginia Bruce autographed photo pictured, isn’t it beautiful? Must be hand painted from the 1930s. I love the mirror and lighting.  My boss had never heard of her but I had, seeing her in two wonderful films, Kongo (1932) and The Great Ziegfeld (1936) not to be confused with her (deleted) part in The Ziegfeld Follies (1930). Along with Betty Grable, Paulette Goddard, and Ann Sothern, she was one of the early Goldwyn Girls, a company of dancers headed by Samuel Goldwyn and even had a bit part in Whoopee! (1930), a film produced by Florenz Ziegfeld.

I read somewhere that Virginia Bruce was a raving beauty and then later again read an interview of her Metropolitan (1935) co-star Cesar Romero stating Virginia Bruce was one of Hollywood’s most beautiful but the silver screen could not fully capture it.

She married 1920s screen actor “Great Lover” John Gilbert in 1932. They divorced in 1934 but he died two years later leaving her the sole parent to their child. A year after Gilbert’s death, she married again but widowed after 5 years, again with another fatherless child.

Up until MGM producer Irving Thalberg’s death in 1936, she had a promising career starring alongside Franchot Tone, Melvyn Douglas, and Frederic March. Afterwards she was regulated to B parts making sporadic films in the 1940s and television appearances in the 1950s. Her last two films were Strangers When We Meet (1960) and Madame Wang’s (1981).