Danny Chang was born in China making his film debut in the 1951 released film Hong Kong starring Ronald Reagan, Rhonda Fleming and Nigel Bruce. Chang won the part over 300+ kids. He credits his appeal to immense cuteness. According to a Lodi News-Sentinel article from November 26, 1981, Reagan stated after viewing the film, “I’ll be darned, all I ever did was look at little Danny.” 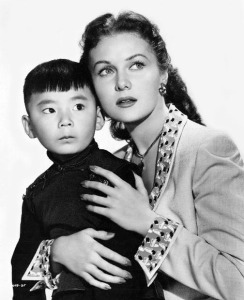 He worked throughout most of the decade. He developed an admiration for redheads after working with Rhonda Fleming, Arlene Dahl and Susan Hayward. After his cuteness allegedly waned, Chang left the industry, eventually teaching engineering at University of California at Davis, from where he has now retired. Mr. Chang is a private man but graciously answered some questions. Enjoy Part 1 of the Q & A.

As a child, who were your favorite actors, TV shows and movies? As an adult? Well I vaguely remember watching Roy Rogers, The Lone Ranger and Sky King on TV. John Wayne was pretty high on the list for movies. As an adult, I would probably say Russell Crowe, Harrison Ford, Denzel Washington and Kiefer Sutherland.

How did your acting career start? I believe that my father became aware of an ad for a casting call for a young Chinese boy to fill the role of Wei Lin in the movie Hong Kong. He actually had been in several movies as an “extra” before that time.

How much fan mail did you get as a child? As an adult? Yours may have been the first fan “mail” (including e-mail) and maybe the only one! though I do recall signing autographs.

Which magazines did you appear? Did your parents keep a scrapbook? My parents kept a scrapbook, but mostly of newspaper rather than magazine clippings.

Were you offered roles or audition? Was there a role you lost but wanted? My memory fails me since I was only 4 years old, regarding what was asked of the applicants at the casting call, but I guess there must have been some requests to follow instructions. The article in a scrapbook indicates that I was the first child interviewed and after some 300+ interviews they still selected me. I’m not certain whether there were any roles that I “lost”, since after that first movie, an agent handled all the details. I would only know when told that I needed to show up on the set.

The Internet Movie Database (IMDB) lists 9 credits. Do you have more? There were more bit parts, I think almost 20, but some were so small as to be inconsequential and I have forgotten which films. I do remember spending two weeks on location in Arizona for the movie Battle Hymn starring Rock Hudson, but never appearing in any scenes in the final movie. I also remember being invited to the Mickey Mouse Club, but spent the entire day in the classroom and never got on the set. I did get to meet some of the Mouseketeers though!

How was your work ethic viewed by the industry? I must have taken direction okay when I was younger, though there are a couple of instances in the first film Hong Kong when I must have been giving the Director fits. In one instance, he “bribed” me to do one scene by allowing me to sit on his lap and drive his car in the studio parking lot. In one other instance I refused to do a scene because they had forgotten to tie the cricket back on my hand until someone figured out what was wrong. You need to understand that I had not started attending school yet so that I mainly only understood simple Chinese commands.

Which languages do you speak? What languages were used in your roles? Most of the roles were silent, though in Hong Kong, I sing in Chinese … Shanghai dialect, not Mandarin, since that was my first language. Once I started attending public schools, learning English and speaking American English became a priority so you won’t detect any accent and it is the only language I know … though I took French in high school.

Were you schooled on set or did you attend a regular school? When filming, there was a requirement for attending class on set. Otherwise, I attended public schools.

Was your income enough to make a living? Were you a studio contract player or independent? Typically there would be contracts signed for individual movies. Kids didn’t earn all that much, but I think it probably was enough, interest compounded over time to be able to pay for a college education.

How did your Hollywood career end? What was your last role? Was it your decision? The last role was with Victor Mature as “Ellington.” I died covering up a baby from a bomb blast, so at least I got to go out as a heroic figure! I think the movie bombed as well. I think I had grown sufficiently as to not be so cute and was getting “stiff.” Around that time, I think my father asked me if I still wanted to be in movies and I told him no, that I preferred being in school. I must have been about 11 yrs. old or thereabouts.

Did you continue acting or perform in any way after leaving your Hollywood career? No the only other acting I did was as a university professor … each time I got up to lecture! Now that I’ve retired, I tried singing and playing guitar accompaniment again. Not enough to be good, but passable. 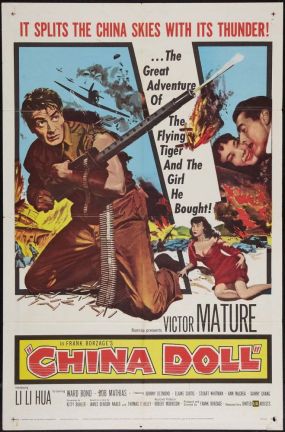 Look for Danny’s name on the poster!