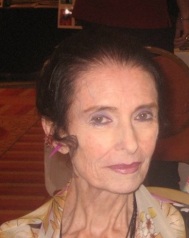 Yesterday concluded the 5th Annual Turner Classic Film Festival. Due to finances, I couldn’t attend. I’d have loved to have seen Kim Novak, Paula Prentiss, Maureen O’Hara and for the 2nd time, Margaret O’Brien, who took part in the Mickey Rooney Tribute screening of National Velvet at the festival. Before his death, he and Margaret were working on a movie, Dr. Jekyll and Mr. Hyde. Fortunately, his role was completed so he will be included in the final cut.

I found out too late that Margaret O’Brien was a guest at the annual Plaza Classic Film Festival last year but luckily saw she was making an appearance at the Mid-Atlantic Nostalgia Convention near Baltimore. The woman is busy having also attended the TCM Classic Cruise and now the Film Festival. Who knows where else she’ll appear this year.

At Mid-Atlantic Nostalgia Convention, I also met Larry Storch and Conrad Brooks of Glen or Glenda and Plan 9 From Outer Space fame, who developed a major crush on me. Mamie Van Doren was supposed to be there too but unfortunately could not make it. I flew out partly for her and partly for Margaret. I didn’t fly out for Larry but his table was right next to Margaret’s and he turned out to be a sweetheart becoming the highlight of my trip along with Margaret. Living in NYC, the man loves to walk, do yoga and headstands every day.

Margaret was very nice to answer my numerous questions at her table, at her Q&A and oh my, the highlight of my whole trip, I ran into her in the ladies’ lounge. She complimented me on my blouse from the day before after I told her she was stylish. I was in heaven because she remembered me. I wonder if I’ll see her again and if she’ll remember me.

Most of my questions were on flamenco. Margaret’s mother was Spanish but Louis B. Mayer did not want Margaret speaking Spanish in fear she’d have an accent. Her mother, Gladys Flores and aunt Marissa, were flamenco dancers. She recounted a story of how my dancing idol Rita Hayworth originally didn’t realize that Margaret was the daughter of the Flores sisters whom Rita had learned some dance moves. Margaret enjoys flamenco and Middle Eastern fusion dancing but stated she did not learn at the level of her mother.

She told me actress and director Ida Lupino’s sister, Rita, was also a flamenco dancer.

Margaret encouraged me to keep on dancing. I wish we could get some footage of Margaret Middle-Eastern flamenco fusion dancing with me!